SHAZAM! WILL SIT "RIGHT IN THE Core OF THE DCEU," SAYS ZACHARY LEVI 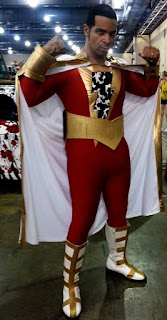 Considering how weaved in the DCEU 2019's Shazam! will be? In a word: Exceptionally. Talking with Spoiled Tomatoes in front of the Warner Brothers. Comic-Con board on Saturday, star Zachary Levi uncovered that the new motion picture – which had its trailer make a big appearance today – sits at the specific focal point of the DCEU, and is a world in which kids grow up watching Batman and Superman on the news. Asher Blessed messenger, who plays Billy Batson (the child who winds up brave by saying that enchantment word), Jack Dylan Slow eater, and executive David F. Sandberg were additionally close by to reveal more insider facts about what appears to be the lightest DC offering yet.